I do believe I found my favorite pie!  I always say I’m not much of a “sweets” eater, and I’m not for the most part.  I can take it or leave it.  But I’ve also said I don’t have to worry so much about what to make with desserts or treats because it’ll get eaten (usually).

This will so not even come close to be a “good for you” sort of pie.  I did use fat free cream cheese and there are fresh strawberries.  But the marshmallow cream is what does it.  It added THE best flavor to this pie by far.

1 Heat oven to 450°F. Make 1 pie crust as directed on box for One-Crust Baked Shell using 9-inch glass pie plate. Bake 9 to 11 minutes or until lightly browned. Cool completely, about 30 minutes.
2 Unroll remaining pie crust on work surface. With desired cookie cutters, cut shapes from crust. Place on ungreased cookie sheet; bake 6 to 8 minutes or until light brown. Cool.
3 In medium bowl, beat cream cheese with electric mixer on high speed until light and fluffy. Stir in marshmallow creme. In large bowl, mix strawberries and pie glaze. Reserve 1 cup strawberry mixture; set aside. Spoon about 1/3 of the marshmallow mixture into pie crust; top with remaining strawberry mixture, and the remaining 2/3 marshmallow mixture. Top with 1 cup reserved strawbery mixture. Arrange cut outs over filling. Cover; refrigerate at least 8 hours or until set but not firm. Store covered in refrigerator.
**This strawberry pie recipe by Joyce Gaddie of Clinton, Tennessee, won 1st Place at the Pillsbury Refrigerated Pie Crust Pie Baking Championship, 2009 Tennessee Valley Fair.
Garnish with three miniature marshmallows on top of each slice, if desired.
So the waiting part.  Yeah, not so good with that.  I let it sit for….oh two hours.  I had to take my pictures first and then cut a piece.  When the directions say wait for 8 hours, it does need to wait for 8 hours.  However, I didn’t mind one bit that it wasn’t set when I ate it.   I decided then that this was my favorite pie!!!
Loved, loved, loved it.
Patricia – Two Girls Cooking  😉
Source:
Pillsbury

I found this recipe while looking for something new to make for the holidays. I’ve only worked with egg whites once or twice before and wasn’t very successful. I like a challenge now and then so I thought I’d give these a shot. I felt a little like a mad scientist: sugar brewing over here, gelatin over there, egg whites in the mixer. I had a good time making these, maybe because I felt like I won- I beat the egg whites! It was so neat to see it grow in volume as it whipped together. When it was all done I was (overly) proud of my marshmallows. They are light and fluffy, with just enough (not too much) peppermint flavor. I think it would be fun to experiment with different flavor extracts and see how they taste. I shared them with anyone who’d try one, and even got a couple requests for the recipe!


Coat a 13X9 pan with cooking spray; line bottom with parchment paper. Coat the parchment with cooking spray, and set pan aside. Put sugar, corn syrup, and 3/4 cup water in a small saucepan. Cook over medium heat, stirring, until sugar is dissolved. Stop stirring; let mixture come to a boil. Raise heat to medium-high; cook until mixture registers 260 degrees on a candy thermometer. 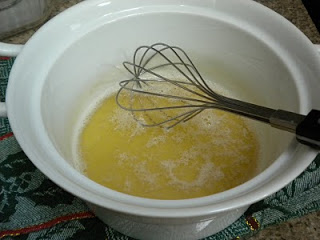 Meanwhile, sprinkle gelatin over 3/4 cup water in a heatproof bowl; let stand 5 minutes to soften. Set the bowl with the gelatin mixture over a pan of simmering water; whisk constantly until gelatin is dissolved. Remove from heat, and stir in extract; set aside.
Beat egg whites in the bowl of an electric mixer fitted with the whisk attachment until stiff (but not dry) peaks form. Whisk gelatin mixture into sugar mixture; with mixer running, gradually add to egg whites. Mix on high speed until very thick, 12 to 15 minutes. 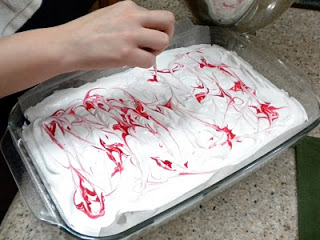 
A few things I learned that might come in handy:
* The original recipe used an 8 in square pan. The marshmallows were very tall, I ended up cutting them in half. I prefer the 13X9 pan size.
* These are quite sticky, but if you roll them in powdered sugar and brush off the excess they don’t stick anymore. I did this to the top and sides before starting to cut my second batch and they went much easier.
* Using a pizza cutter to roll through went a lot faster and smoother than a knife.


Scott got a chocolate fountain for Christmas with my family last weekend. I think these will be great for our first chocolate fondue! I know I said in my last post that was all of my holiday treats; but I promise, I really am done now with holiday treats. For this year…  🙂
– Jodi 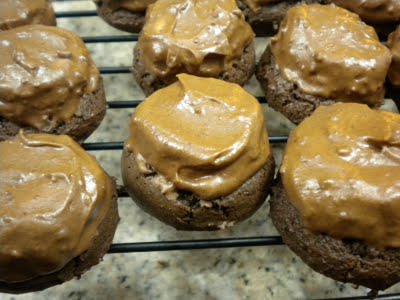 I made these right before Thanksgiving and just got too busy to post them. For Thanksgiving I hosted a big dinner for about 25 people, and it turned out great! I was planning on posting all about it, but in the excitement of the day I completely forgot to take pictures. Maybe next year…  Anyways I found these cookies on the Martha Stewart website and decided to give them a try. They tasted great, I love the marshmallows and chocolate together. They are moist and chewy and quite addicting. Having “just one” always turned into at least 2 or 3. I always seem to have trouble though with lumpy chocolate frosting. Anyone out there with suggestions, I’d love to get this kink worked out. I’m pretty sure either my cocoa powder or my powdered sugar is the culprit, maybe if I sift them next time? Help!


Preheat oven to 375 degrees. In a medium bowl, whisk together flour, cocoa powder, baking soda, and salt; set aside. 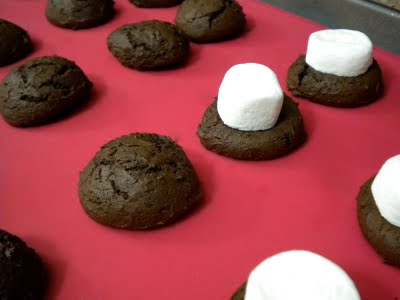 In medium bowl cream together butter and sugar with mixer until light and fluffy. Add egg, milk, and vanilla, and beat until well combined. Add reserved flour mixture; mix on low speed until combined.
Using a tablespoon or 1 3/4-inch ice cream scoop, drop dough onto ungreased baking sheets, about 2 inches apart. Bake until cookies begin to spread and become firm, 10 to 12 minutes.
Remove baking sheets from oven, and place a marshmallow, cut-side down, in the center of each cookie, pressing down slightly. Return to oven, and continue baking until marshmallows begins to melt, 2 to 2 1/2 minutes. Transfer cookies to a wire rack to cool completely.


Place powdered sugar in a medium bowl. Whisk in butter and cocoa powder. Add milk and vanilla, and whisk until well combined.
Spread about 1 tablespoon of frosting over each marshmallow, starting in the center and continuing outward until marshmallow is covered.


I’ve just gotten started on my holiday baking. I have a whole list of things I’m excited to try and of course have to make some old favorites too. If I can get this frosting right I might have to add these to my holiday list!
– Jodi

Tonight I’m having dinner at a friend’s house, and since she’s doing the cooking I offered to bring something to share. She said how about desert? …Perfect!  I can totally handle that.
I decided brownies were in order. And while I don’t mind regular from the box brownies, I thought I’d try my hand at something new. After doing some searching through recipes I decided I would give these a try. Now, I know they are for later, but what kind of friend would I be if I showed up with sub-par brownies? I had to do a taste taste purely for quality control purposes (clearly nothing to do with my chocolate craving). They are pretty nummy. A little gooey, but that’s what makes s’mores great!
– Jodi
10 Graham Crackers, broken in half (20 squares)
1-1/2 sticks butter or margarine
4 squares Unsweetened Chocolate
2 cups sugar
3 eggs
1 tsp vanilla
1 cup flour
2-1/2 cups Miniature Marshmallows
1 cup Semi-Sweet Chocolate Chips or Chunks
Heat oven to 350°F. Line 13×9-inch baking pan with foil; grease foil. Place 15 grahams in pan, overlapping slightly. Break remaining grahams into pieces; set aside. Microwave butter and chocolate squares in large microwaveable bowl on High 2 min.; stir until melted. Add sugar, eggs and vanilla; mix well. Stir in flour. Pour over grahams in pan. Bake 30 to 32 min. or until toothpick inserted in center comes out with fudgy crumbs. Sprinkle with marshmallows and chocolate chunks. Bake 3 to 5 min. or until marshmallows begin to puff. Press reserved graham pieces gently into marshmallows. Cool. Use foil to remove brownies from pan before cutting to serve.