How many of you have been to the $5 dollar dinners website?  I follow them on Facebook and saw that they were going to be doing 20 meals for $150.  As soon as it posted I had to see what I could make for at least for this week!  I typically don’t shop at once for that many meals but if you do then you’re in luck.  You need to head on over and get those meals!!  This is one of them that I found for this week.

I plan my meals not only on a budget but also on what my schedule for the week will be.  Since I didn’t have anything going on this day, I knew I’d have time to spend on making something new.  I had most of the ingredients on hand so if I had to guess on the cost, I’d say that this was pretty close to the $5.  I had the spices, sour cream, butter, and cheese in my kitchen.  Some little mouths aren’t a fan of tuna in the house so I substituted chicken instead.  I got the rotisserie chicken instead of the can chicken and I just cut it up.

As you can see, little Miss Khali isn’t very interested in eating her dinner.  Her little mind is preoccupied!!!

Mr. Caleb appears to be more interested in getting his loose tooth out than eating his dinner!!!!

First of all, excuse my after dinner mess!  But here’s Miss Brooklyn going up for seconds!  So she liked it.  And she’s the picky eater of the bunch!!!!

Super easy to make.  Super easy on your wallet.  Super tasty too!

I’ve looked over the other 19 recipes from the $5 dinner website but I haven’t put them down for any days this week.

Taco Tuesday for us here and then on Wednesday hopping to make the Whole Wheat Banana Pancakes.  You can’t go wrong with breakfast for dinner.

In fact, the other girl came over with Sam last night to have dinner with us.  We had some breakfast quesadillas.  Unfortunately neither of us took any pictures of what we made.  Jodi made a nummy dessert with some crescent rolls, brown sugar, and some cinnamon chocolate chips!  Not that often that we get to cooking together any more so I’m sorry we didn’t take the time to show you our fun.  Trust me, we ate really well yesterday!

I hope you have a great week.

I found this recipe for banana bread on Facebook.

I loved that it used honey in place of sugar and apple sauce in place of oil.  It also used the whole wheat flour that I’ve been trying to use for baking instead of the regular flour.  This is the first time I’ve had banana bread made with wheat flour and I’ll say that it’s very good.

If you’re a banana bread fan and want to try to make it a different way, give this a try!

I was on my lunch break today when I was making this and my mom had never heard of making bread with apple sauce or honey.  I’ll have to call her tomorrow and let her know she should make this!!  Eat it fresh out of the oven and it’s really good.  I didn’t have any butter on it either!!  Trying to eat good can be hard sometimes but you don’t have to sacrifice either.  (even though I didn’t go to Zantigo this Sunday after church!!)

Just having the kids walk in the door and ask what smelled so good was worth it today!!  Puts a nice smile on your face.

I set my timer for 60 minutes and I could smell it in my office before it went off…It took a little less than the time stated.  So make sure you set your timer if you’re away from the kitchen!!

Ok so last week I had posted that I was trying to eat less processed foods.  In my defense I did make these a bit ago!  AND I will say again, all in moderation.  I strongly believe that if you limit yourself completely, you’re only setting yourself up for failure.  I believe this to be in all things with life.

So enjoy the good things.   And enjoy good food, even if it means that you stray from what you shouldn’t eat for a day!

Besides that, these are too good to pass up.  The kids loved helping make these.  And they loved eating them just as much!!!

Just a few things were needed for these awesome appetizers. 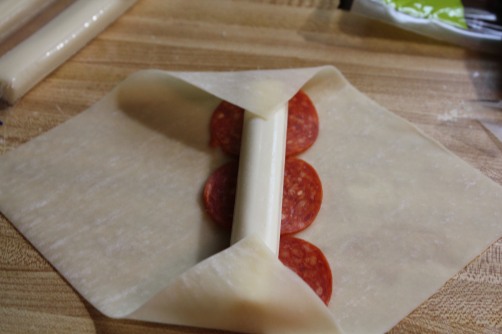 Just take an egg roll wrapper and put some pepperoni in the middle, place your cheese stick in the middle and roll this like you would a burrito!!!

Place some parchment paper on a baking sheet and get them ready for the oven!!

Ah-mazing!!!  Must try.  If you’re looking for a fun thing to have for Super Bowl Sunday, this would be a great idea.  Or if you’re looking for something to do on Super Bowl Sunday and aren’t watching the game (kidding – kidding), then you can try these!!  If you have kids, this is a great way to get them involved with helping out.  They love to help and see the final product just as much, if not more than we do!!!

Enjoy your week!!!!!  Remember to always have fun when you’re in the kitchen.

Raise your hand if you’re a refried bean lover!!  Mine is raised, see it, see it???

I just blogged about the whole wheat taco shells that I made from 100 Days of Real Food.  I got this recipe from the same site.   When I saw how easy it was to make these beans, I was at the store that day and made these the following day.

Super easy.  Who would have known!  Well not me.  I made a huge batch the second time around and I have a bag in the freezer.  I eat this for lunch and with my tacos!!

You simply pour the ingredients in the slow cooker and mix every so often… Mash after about 8 hours and here you have the best refried beans without the additives that you get for a can.

I’ll admit the first time I made these, I was a bit impatient.  I wanted them done so I could eat them for dinner that night.  I drained them a bit too early and some of the beans weren’t as tender as they should have been. SO, I did wait this week the 8 hours and they turned out great.

I highly, highly recommend making these if you are a bean lover.  Great source of fiber, easy to make, and you know what you’re eating.

Give them a try and see how you like it.  I love cooking and I love making my own food.  It’s scary to see some of the things that we are using these days.  And don’t get me wrong, I do still use some things that aren’t made from scratch, but I’m very cautiously reading the labels.  If it’s too much for me to understand, I put it back!!!!

Try these and let me know what you think!!!

Every Tuesday at our house is Taco Tuesday.  No pun intended for Taco John’s!!!!

I’ve been really trying to cut out processed foods as much as I can.  Yes, I still make my weekly trip to Zantigo after church but that sure doesn’t count!!!  I may have to go there a bit less, but I can’t cut out everything.

On Facebook I found a site that is called “100 Days of Real Food”.  Which is where I happen to find this awesome recipe!  I’ve made the refried beans as well and they are so good.   You may not be a label reader but I have been.  And I’m not sure if it was this site that I read this or if I saw it elsewhere, but it said that if there are 5 ingredients that you cannot pronounce then you shouldn’t eat it!  I feel that way about food and products that I use on a daily basis now.

This recipe has only 4 ingredients in it.  AND I know how to pronounce them and I know what they are!

I was a bit concerned if the grandkids were going to like the texture and taste of the wheat but I gave it a try anyways.  Khali isn’t a fan of eating any shell that I give her on taco night.  She wants the cheese only.  Just give me the cheese and the black olives.  Caleb didn’t care for it but ate it anyways.  And Brooklyn ate it and liked it just like me!

Here is my dog, Clyde.  He thinks that by some chance he’s going to be eating that dough.  He was sadly wrong.  Sorry buddy.

I don’t have a tortilla press but I sure wished I did.  I have made these twice now and I had a hard time getting them to form into a circle.  Last night, by the advise of my friend, Heidi, I place the dough between two pieces of parchment paper and used a pan to flatten them.  That gave them the shape, then I rolled just a bit to thin them out.

After you get the dough formed into the log you want to cut them into 12 pieces.

Flatten them out a bit and let them sit for about an hour.  I have to make sure that dog of mine is kept from anything sitting out.  He sees it, he’ll find a way to make it into his mouth.

I was really surprised at how good these were.  They had great flavor (I did add a bit of garlic salt to the dough the 2nd time I made this).    I love tacos.  And usually I have mine with hard shells but as I said I’m trying to do a little bit better with knowing what is in the food I’m putting in the family’s belly.  I made the taco seasoning as well.  But maybe I’ll give hard shells a try!!!!!

Back to the shells at hand… These are pretty good and better for you.  I recommend you go to the site that I got this recipe and take a look around.  I’ve done the refried beans as well, as I’ve said.  Those are amazing with the tacos.